While playing poker, you can save your hand history containing info on opponents encountered, as well as their actions in the course of this play. Mining is a massive gathering of hand histories for gaining an advantage over other players. In exchange for a few dollars you can get millions of hands, thereby obtaining additional info on each opponent. For example, buying tournaments mining with a buy-in of $ 11 will grant you a lot of useful info on the local players including the index of aggression at each stage, the frequency and size of bets, pushing ranges, and more.

The main advantage of buying tournaments hand histories is that you can instantly get a statistical info on any opponent – even if you never played with him (or her) at one table. Imagine the situation: you've signed up for a tournament with a higher limit for the first time and find yourself at a table with some unknown opponents. It will take you at least an hour to gather important info on those players. You'll also have to watch each player closely, write down a lot of notes, and pay some precious time on searching for opponents via third party websites. It takes a lot of time, and if you're playing simultaneously in a number of tournaments, than you will most definitely lack time for doing everything at once. In such situations, you can just buy tournaments mining containing all the necessary info on virtually any player at the table.

Mining of tournaments hand histories can be of use in various situations. Thanks to it you can get info on all the players and confidently move to some higher limits in a play with unfamiliar opponents. When away from the poker table, you can also learn any player's strategy by means of statistics gathering software (Holdem Manager or PokerTracker). And this is only the beginning! Now we'll have a more profound discussion about some of the benefits of buying mining in tournaments and look through some examples.

Fine tuning to opponents at an early stage

At an early stage, playing against some unfamiliar opponents can cause a lot of inconvenience. This is fair to the greatest extent for some initial hands in a tournament, when we have absolutely no info on the players at the table. For example, we raise with a pocket pair of queens, and an unknown opponent makes a huge 3-bet with an effective stack of 100 big blinds. It's not a piece of cake situation for an early stage, but with some statistics for the player, we could easily have chosen the optimal action. If the opponent makes similar 3-bets no oftener than 3%, then we have an easy fold, but it may turn out that we are playing against a novice with a 10% 3-bet, and going all-in in this case would bring us a lot of chips at the tournament's very beginning. In that kind of situation, one can learn about 3-bet range only by means of hand history mining. Availability of statistics on opponents significantly simplifies the game at an early stage, and by acquiring tournaments mining, you also get a lot of info for the future. In addition, HHmailer users can subscribe to the free "online mining" feature and receive the latest tournaments hand history every 5 minutes! This means you'll possess the info on your opponent, even if he's playing at some other table. With this feature, you'll get a huge advantage when moving to his table. The problem of playing with unfamiliar opponents is practically solved thanks to online tournaments mining, because you simply won't encounter any, except for beginners.

While playing in major tournaments, you'll be less frequently getting to the prize area and, therefore, you'll have to face some more long-lasting series of misfortunes. The most effective way to reduce the influence of dispersion on the result is to reduce the number of risky all-ins. As we've mentioned earlier, with statistics on the players in our disposal, we'll be able to most accurately determine the pushing range of a certain player, and thus, practically get rid of risky bets. In addition, we'll be able to steal blinds with more profit, and to refrain from unnecessary steals against unsuitable opponents.

Opportunity to thoroughly analyze your opponents' way of playing

If playing in tournaments on a regular basis, you'll constantly face the same opponents at the table. Thanks to hand history you can identify gaps in the regulars' way of playing and actively use those gaps at the poker table. If you're playing with professionals, then finding weak spots will be difficult. However, after analyzing the hand history of a certain player, you can find his weakest sides, and then attack him at the table using the information received. Hand history mining allows detailed studying of statistics, recording the relevant notes, and then using those notes at will during some poker tournaments.

Bubble is one of the most critical moments of a tournament – especially if you have little chips left. In such situations, the decisive factor is the ability to push the stack on time. It requires choosing the best possible situation, which includes table position, pocket cards, as well as the opponents left behind us. When playing against some unfamiliar players, a steal push equals tossing a coin, because we don't know how they react to such actions. With tournaments mining in our disposal, we can accurately determine the frequency of fold per push for any player. Some players in similar situations fold in more than 90% of cases, allowing you to make a solid stack. However, learning such info on some unfamiliar opponents requires access to hand history mining of tournaments.

Let's look at a quick example: Bubble of a major tournament, blinds 500/1000, and we have only 10,000 of chips. 78 cards of the same coat are being dealt on the small blind, all players fold. Is there a reason to make a steal push and risk your chips? The answer depends on the fold frequency of player on the big blind. Suppose we have a mining and we know that the player folds to steal in 80% of cases. We have two options:

First, let's compare the benefits of each option. Bu folding, we lose 500 of chips. While pushing the stack allows us to get 1500 of chips (big + small blind) in 80%, and in 20% we'll get a call and we'll fight the following range: 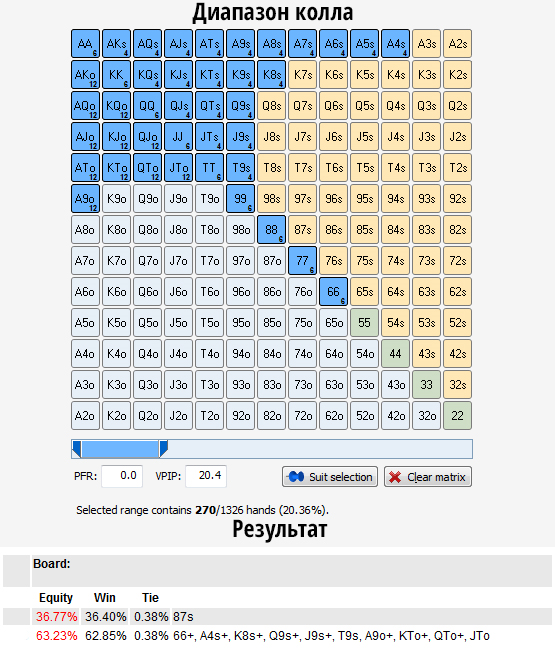 In order to learn some info on an unknown player without using the mining, we have to open third party websites and manually enter the opponent's nickname. This approach has two huge cons. Firstly, it's distracting from the game and causing inconvenience. It becomes virtually impossible to gat info on each end every player, while playing at the multiple tables. Secondly, you'll get only the general statistics, including the number of tournaments played, the average buy-in and the amount of winnings. This approach provides no advanced info on the playing style and ranges of your opponents. Compared to buying tournaments hand history, the use of third party websites is inconvenient, costly and inefficient.

In order to purchase mining on HHmailer, select the type of tournaments you need, move to the tournaments subscribe tab or to the tab of one-time tournaments mining purchase. After placing the order, you'll receive hand history mining on the specified email. You'll be receiving a discount of 5% for each subsequent month of subscription as well. You can also use the online mining provided free of charge for low and medium limits. Online mining grants an opportunity to receive up-to date hand histories every 5 minutes with the help of our program. Move to the tournaments buying section and get the first set of up-to date mining no later than this very.

Subscribing to tournaments mining takes only 3 easy steps via subscription section. First, choose a poker room, and then find the tournament of interest with the help of filters and proceed to ordering tab. The list will include all the poker room's tournaments, and below you can see the coverage and cost. When selecting several of tournaments, you'll get a 50% discount for each subsequent tournament type. 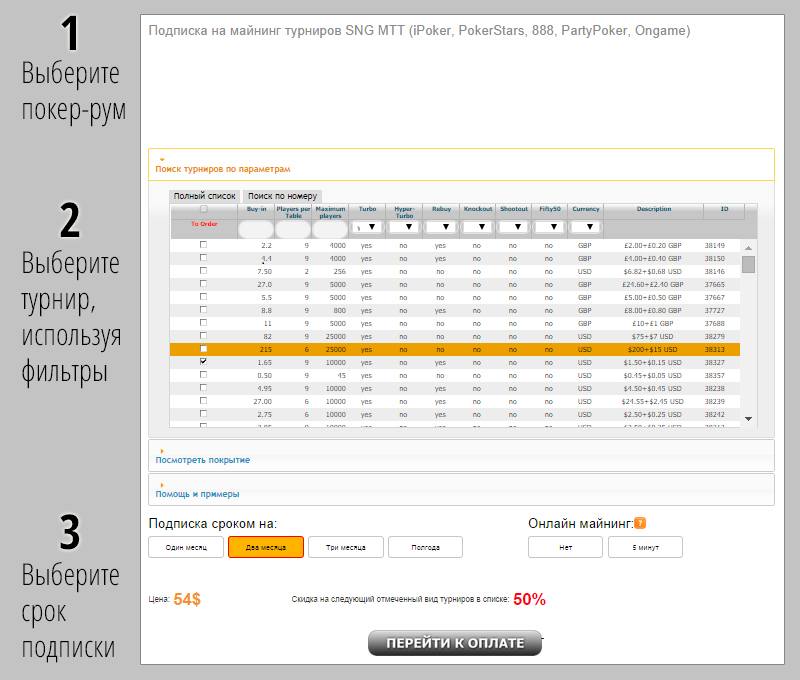 Distribution of any site materials is prohibited without resolution.

Information in this Website is subject to change without notice. The web-site is not a public offer.

All trademarks mentioned belong to their respective owners.